Robert Grunenberg
Robert Grunenberg
Disappear Here
By Bret Easton Ellis
Blair picks me up from LAX. Coming to my house on Mulholland Drive, she has to stop the car, since there are these five workmen lifting the remains of palm trees that have fallen during the winds and placing the leaves and pieces of dead bark in a big red truck, and Blair smiles again.
“Los Angeles is a dark, haunted wasteland, at night vampires hide in the palm trees waiting for the lights to go out and then roam the streets,” she says grinning and drops me at my door. We meet later at her family’s Christmas party.

“Well, come on in. Merry Christmas,” she welcomes the guests. There are two Christmas trees, one in the living room and one in the den, and both have twinkling dark-red lights coloring them. There are people at the party from high school, most of whom I haven’t seen since graduation, and they all stand next to the huge trees. Trent, a male model I know, is here.
“Hey, Clay,” Trent says, a red-and-green-plaid scarf wrapped around his suntanned neck.
“Trent,” I say. “How are you, babes?”
“Well,” he smiles proudly. “I got accepted by this modeling agency, a really good one,” he assures me.
I get up from the bar chair, and through the Venetian blinds I can see the palm trees shaking wildly, actually bending, in the hot winds.
Trent continues, “Guess who’s on the cover of International Male. Me, dude. My agent told them no nude stuff, just like Speedos. I don’t do any nude stuff.”
I believe him but don’t know why and look around the room to see if Rip, my dealer, is at the party. But I don’t see him and I turn away, and Trent and I walk over to Blair. Blair’s father’s boyfriend is also at the party. His name’s Jared, and he’s really young and blond and tan and has blue eyes and incredibly straight white teeth. I can also see Blair’s mother, who’s sitting by the bar, drinking a vodka gimlet, her hands shaking as she brings the drink to her mouth.
“Where do you go to school?” Trent asks. I don’t say anything and smile. “I go to the University of Spoiled Children,” Blair says, still grinning, running her fingers through her long blond hair.

Suddenly, Jared and three boys laugh loudly, in unison. Jared heard this stupid joke from his boyfriend. “What are the two biggest lies? I’ll pay you back and won’t come in your mouth.”
Blair rolls her eyes and dances over to me, singing the words to “Do you Really Want to Hurt Me?” probably stoned out of her mind,
and she says that I look happy and that I look good, and she hands me a box from Jerry Magnin and whispers, “Merry Christmas, you fox,” in my ear and kisses me.
I spot Rip, my dealer, in the corner of the living room, and I go over to him. He pulls me into an empty room. Rip hits me lightly on the shoulder and laughs.
“How the fuck have you been?”
“Great,” I say.
“Thanks for returning my phone call, you dick.” He laughs and
lights a cigarette. I know that Rip hasn’t tried to call me, but I say, “Sorry.” With a razor, he cuts a pile of coke into four big lines, and
then he hands me a rolled-up twenty and I lean down.

Blair and I leave the party after one of the boys falls into the Christmas tree in the living room. I decide to bring her to Daniel’s party. She’s wearing a pink hat and a blue miniskirt and yellow gloves and sunglasses, and she tells me that at Fred Segal today someone told her that she should be in a band. I hardly know anyone at the party, and I finally find Daniel sitting drunk and alone by the pool, wearing jeans and a white Special T-shirt and sunglasses. I sit down next to him while Blair gets us drinks. I’m not sure if Daniel’s staring into the water or if he’s just passed out, but he finally speaks up and says, “Hello, Clay.”
“Hi, Daniel.”
“Having a good time?” he asks slowly, turning to face me.
“I just got here.”
“Oh.” He pauses for a minute. “Who’d you come with?”
“Blair. She’s getting a drink.” I take off my sunglasses. “I think
she thinks that we’re lovers.”
Daniel leaves his sunglasses on and nods and doesn’t smile. “Where are your parents?” I ask.
“My parents?”
“yeah.”
“In Japan, I think.”
“What are they doing there?”
“Shopping.”
I nod.
Blair comes over with a gin and tonic in one hand and a beer in
the other, and she hands me the beer and lights a cigarette and says, “Don’t talk to the guy in the blue and red Polo shirt. He’s a total narc,”
and then, “Are my sunglasses crooked?”
“No,” I tell her, and she smiles and then puts her hand on my leg and
whispers into my ear, “I don’t know anyone here. Let’s leave. Now.”
Once in the car, Blair says, “Lets go somewhere. Hurry.” She names a club and turns the volume on the radio up. We drive and I keep staring past the palm trees, watching the skies. I think about the vampires hiding in the treetops and suddenly remember dreaming about a dead boy standing in the bedroom, moving softly toward the bed, whispering for me to come to join him in his endless sleep, and in the dream the palm trees are taller and bending in the wind with their fronds blooming against a sparkling blue sky. 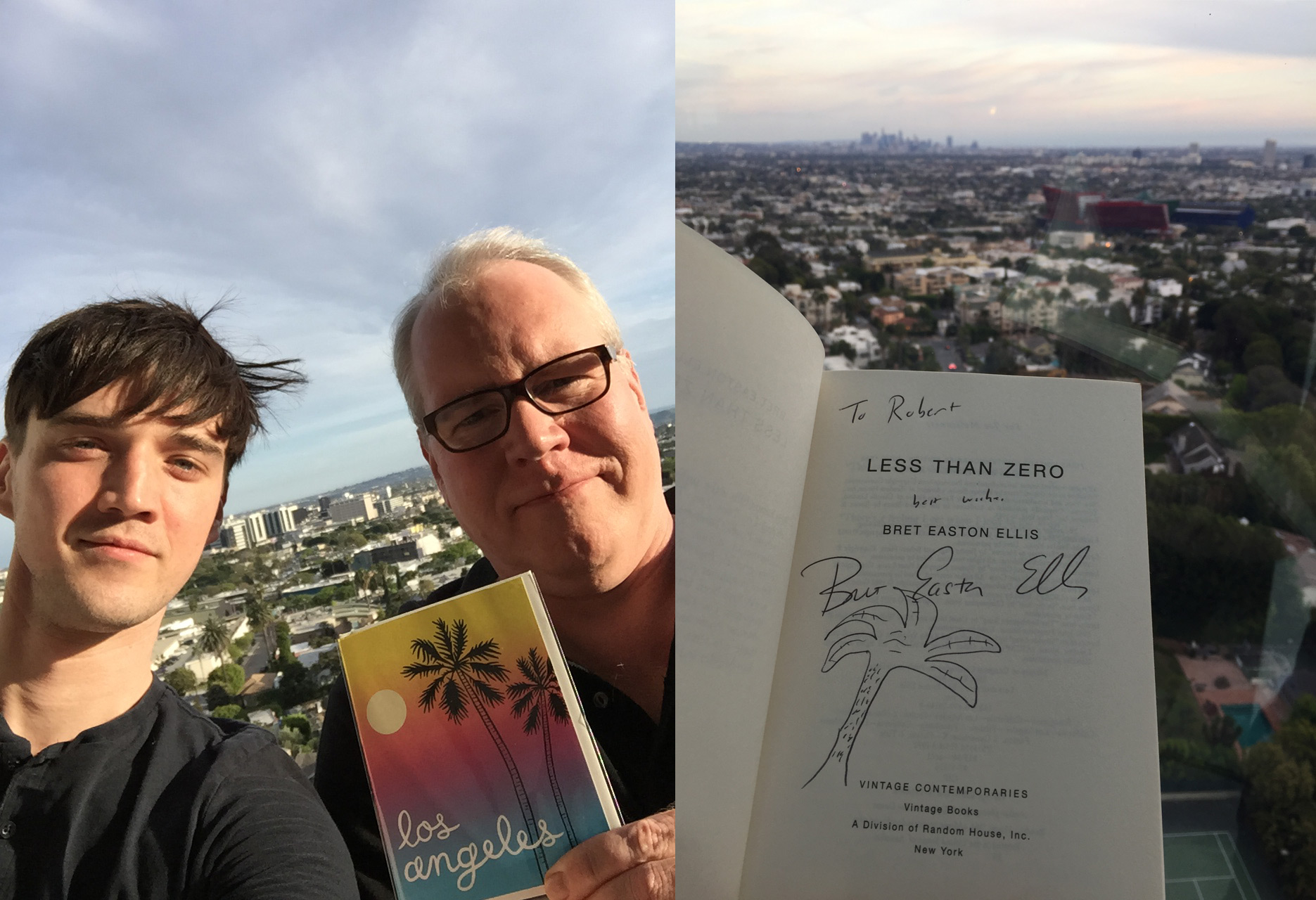 Manage Cookie Consent
We use cookies to optimize our website and our service.
Manage options Manage services Manage vendors Read more about these purposes
View preferences
{title} {title} {title}
Thanks for subscribing!